We have a book! “Adelaide’s Legacy: Tichenor Orthopedic Clinic for Children” 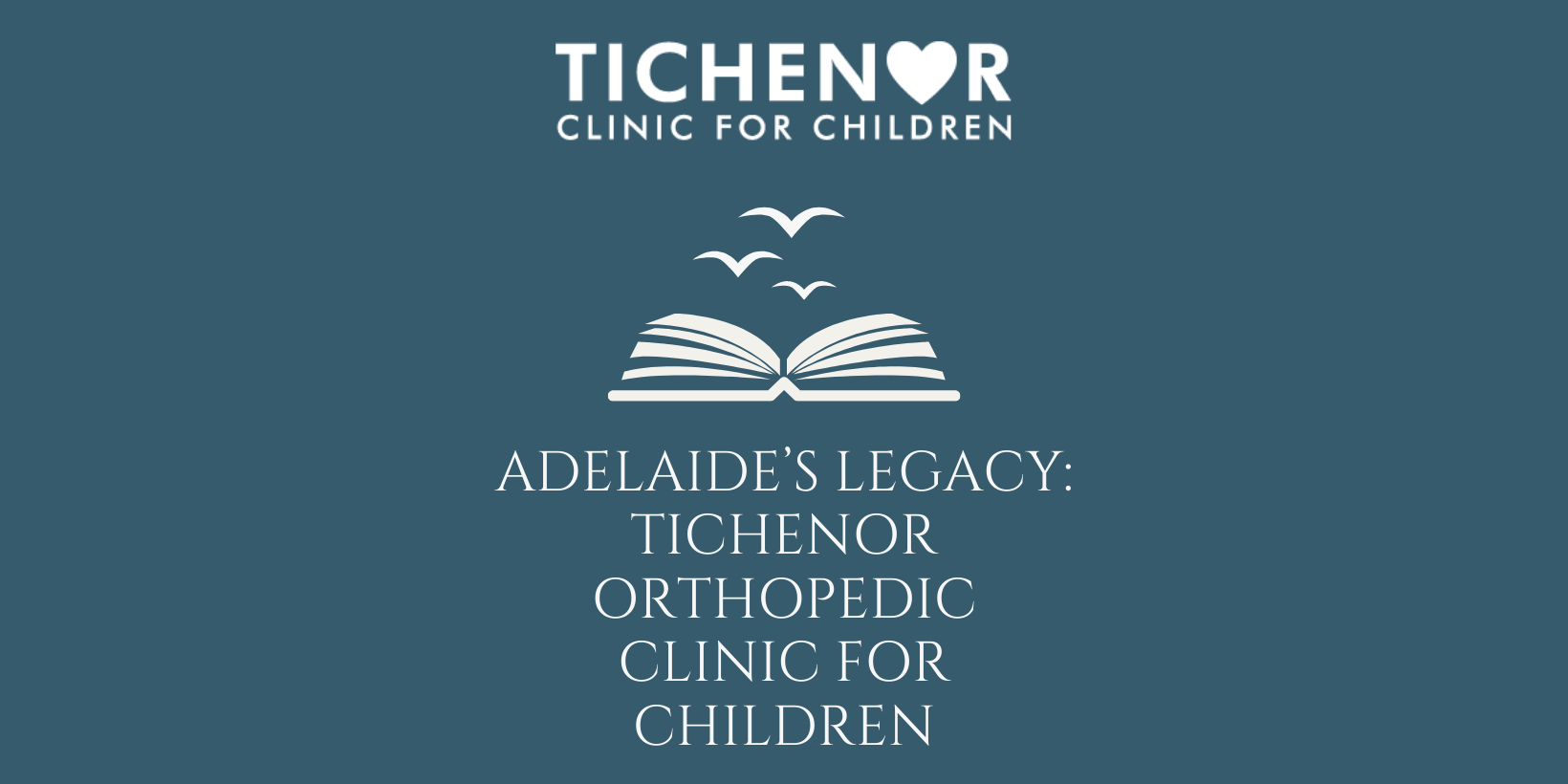 Every day, dozens of people drive by or walk by the Tichenor Clinic, on Long Beach’s east side, and admire the building’s remarkable Art Moderne architecture, inspired by the Art Deco of the 1920s.

But few stop to see the inspirational and sometimes miraculous happenings inside it.

One of those passersby was journalist and writer Karen Robes Meeks, who lived near the Termino Avenue clinic and often walked by it but had never ventured inside.

At least not until Dr. Charles Durnin, president of the Tichenor Support Foundation Board of Directors, approached Meeks and asked her to write a book on the history of the nearly century-old institution — one of Long Beach’s best-kept secrets and quiet treasures.

The book is a comprehensive look at how the Tichenor Clinic, 1660 Termino Ave., has grown from treating fewer than a dozen kids when it first opened in 1926, in the basement of Community Hospital Long Beach, to an average of 800 children annually today in a 1938 building designed by famous Long Beach architect W. Horace Austin.

Over the following three weeks, the Press-Telegram will run excerpts from the book, which will detail Adelaide Tichenor’s life, the clinic’s battles against various illnesses and where it will go from here.

One of the many highlights of the book is a biographical look at the life and times of Adelaide Tichenor, the clinic’s founder, an amazing, trailblazing woman from Ohio who created a new life for herself in Long Beach. She earned the nickname “Mother of Long Beach Clubs” by helping create the Long Beach Day Nursery, the Long Beach Public Library, the Ebell Club and, of course, the Tichenor Clinic.

She also was deeply involved in supporting the suffrage movement in Long Beach in the early 20th Century.

Meeks, a former Press-Telegram reporter, writes about how Tichenor’s greatest achievement, establishing a clinic-school for children with special needs, was inspired, in part, by her own disability, a clubfoot she endured her whole life, hindering her walking since birth.

Unfortunately, Tichenor died in her home in 1924 after fighting an illness that kept her bedridden for seven months. She was 78 and she never got to see the opening of what was to be her finest legacy.

But Meeks’ book details how Tichenor had left detailed plans for the clinic-school, even naming five friends to run the clinic before she died.

The friends — Benjamin Tucker, Florence Bixby, Charles Windham, William Graef and Clyde Doyle — were some of the most influential people in Long Beach at the time. Tichenor also bequeathed most of her money toward a sustaining trust of more than $300,000, the equivalent of about $4.5 million today.

When she started digging into the rich history of the Tichenor Clinic, Meeks said, she discovered “amazing things happening within the clinic: children with disabilities taking their first steps, saying their first words and grasping their first wins against challenges that, at times, seemed impossible to overcome.”

Meeks writes heartwarming stories about a girl who communicated with her mother for the first time through the encouragement of speech therapists and a boy who overcame the crippling effects of polio through the clinic’s swim therapy program after being told by other doctors that he would never walk again.

There’s also a story about Victor Perez, a 5-year-old boy who had leg pain so persistent he couldn’t sleep. A pediatrician dismissed his aches as growing pains, but the boy’s mother took him to Tichenor Clinic for a second opinion.

Durnin, then one of the clinic’s doctors, discovered a bone tumor on Victor’s thigh and removed it, saving the boy from more serious leg pain that would have affected his walking. Victor returned to Tichenor Clinic 30 years later — to serve as a board member and medical director.

These stories were the favorite part of the book for Lori DeLaney, who served as Tichenor’s executive director for 27 years before retiring in October and turning over the clinic’s leadership reins to Kathryn Miles.

“Karen Robes Meeks weaves together stories in the book that bring Adelaide’s vision to life, beautifully capturing her caring for children and commitment to excellence,” DeLaney said in a foreword to the book. “Embedded in Tichenor’s mission is a commitment to children.

We believe every child should have access to early intervention and rehabilitative services,” she added. “Every parent should be offered support and resources to mitigate the effects of a disability on their child’s health, education and quality of life.”

Meeks also writes about how the Tichenor Clinic took on many of the community’s unmet needs, from the early years of polio and scoliosis to cerebral palsy and autism. The book deals with how the clinic created programs centering around orthopedics, early intervention development, speech-language, physical and occupational therapy, and swimming and parent support.

In its evolution, the clinic has been the site of forward-thinking orthopedic surgery and therapeutic approaches.

Doctors at the clinic pioneered bone grafting, leading them to secure the first bone bank in California in 1948, Meeks writes.

Durnin — a Long Beach native who followed in the footsteps of his father, William, who also was a doctor and volunteer at the clinic — organized a scoliosis clinic where doctors conducted screenings and taught school nurses how to do them.

The book contains stories of other talented doctors and administrators who strengthened Tichenor’s mission in the community.

Doctors like Dr. Ross Sutherland, the clinic’s first medical director; Dr. H. Milton Van Dyke, Dr. Roy Terry and the legendary Dr. John Rowe, who served at the clinic for more than 40 years as medical director and board member.

Despite all of the technical advancements and surgical innovation, Chang said, Tichenor’s staff is most proud of being able to continue the dream started by Adelaide Tichenor nearly a century ago.

“I believe that we have been faithful to our founding principles,” he said, “and have been rewarded with thousands of playing children and smiling faces.”

The idea behind the book, Durnin said, was to record the history of an important institution in Long Beach. He thanked Peter Ridder, Tamara Achauer and Terry Hodel for their support in helping fund the book.

“Karen and the book do a great job of describing the clinic’s history, the role that Adelaide Tichenor played in starting the clinic and her legacy that continues today in helping thousands of children lead healthier lives,” Durnin said. “The future is very bright, and I hope the clinic will go on for another 100 years.”

The soon-to-be-published book, “Adelaide’s Legacy: Tichenor Orthopedic Clinic for Children,” will be available for a donation to the clinic.

All proceeds will benefit the low-to-no-cost therapy services and programs for children and families.

Dec. 20: Who was Adelaide Tincher? The life and times of an amazing, trailblazing woman in Long Beach’s early 20th Century.

Dec. 27: How Tichenor Clinic met unmet needs of Long Beach, from polio and scoliosis to cerebral palsy and autism.