Adelaide Tichenor: The life and times of a trailblazer 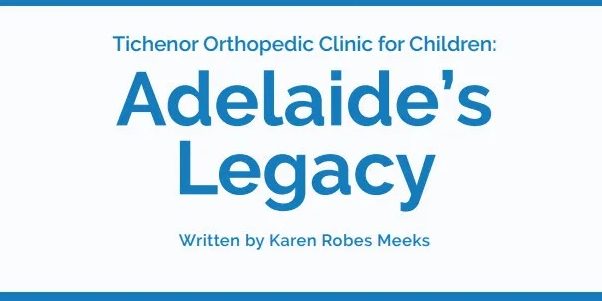 The first of three excerpts from the forthcoming book, “Adelaide’s Legacy: Tichenor Orthopedic Clinic for Children.”

Editor’s note: Starting today, the Press-Telegram will run excerpts from the forthcoming book, “Adelaide’s Legacy: Tichenor Orthopedic Clinic for Children.” Today’s excerpt — “Who was Adelaide Tichenor?” — deals with the life and times of a trailblazing woman in Long Beach during the early 20th century.

History best remembers Adelaide Alexander Tichenor as the “Mother of Long Beach Clubs” and the founder of Tichenor Clinic, but her journey to the seaside city might have never happened had destiny not altered its course.

Had fate not intervened, some of Long Beach’s most significant organizations would not have existed or survived, including the Ebell Club, the Long Beach Public Library, the Long Beach Day Nursery and, especially, the nearly 100-year-old Tichenor Clinic.

Without Adelaide, Tichenor Clinic would have never become the iconic institution it is today, helping children with disabilities such as cerebral palsy or congenital clubfoot, a condition Adelaide had since birth.

Adelaide could have stayed in Ravenna, Ohio, where she was born on Oct. 9, 1845. Her father, John, was a businessman in the small midwestern city, 15 miles northeast of Akron. She loved reading and the arts and voraciously sought education. She studied at Oberlin College (one of the first colleges in the country to admit women and African Americans), as well as St. Louis Normal College in Missouri and the Massachusetts Normal Art School (now Massachusetts College of Art and Design) in Boston, under famed art educator and author Walter Smith.

Adelaide became a teacher and worked in public schools in St. Louis and Boston. She excelled in her profession, compelling William T. Harris, then superintendent of schools of St. Louis, to declare Adelaide “the best teacher he had ever known.”

A teaching opportunity drew Adelaide west to California in 1884. She hadn’t planned to marry at the time. In fact, she was preparing for a trip around the world – a lifelong dream of hers – when fate interceded.

She fell in love with Lester Schuyler Tichenor, a well-to-do businessman and former manager of Russ Lumber Co.

Lester, who was born in Newark, New Jersey, came from a long line of East Coast ancestors and was related to one of the oldest families in New Jersey. He worked in lumber in Hawaii, then in San Bernardino, where he became one of its pioneering residents.

She could have stayed in San Bernardino, where she made a home with her husband, but their union, although happy, was short-lived. Lester died of pneumonia on Jan. 9, 1892. He was only 38 years old. They had no children.

They would have celebrated their seventh wedding anniversary that summer.

Some would have crumbled under the weight of that grief, but Adelaide came from strong New England roots. She was the surviving child to parents John and Courance (Hamlin) Alexander, whose families were among the East Coast’s first settlers. She counted John Alexander, a captain in the Revolutionary War, and Giles Hamlin, a deputy of the General Court from Middletown, Connecticut, among her ancestors.

After her husband died, Adelaide sold his 100-acre ranch and moved forward without him.

Two years later and after a bit of traveling, she came to Long Beach to manage her property interests.

She arrived at a time when Long Beach itself was getting started. The fledgling town – formerly Willmore City and newly named Long Beach – had incorporated six years earlier. The city barely numbered 3,000 residents by the turn of the 20th century, but it was bursting and unfolding along the Pacific Ocean.

Competing railroads drew tourists and those who dreamed of living near the waterfront.

A volunteer group that would eventually become the city’s fire department was forming to meet the influx of residents.

Long Beach, a waterfront community aspiring for more than seaside amusements, was a city Adelaide could help shape into something more.

Shape the city she did.

For the next three decades, Adelaide made Long Beach her home. After leaving the world of teaching, Adelaide developed an acumen for business and made a second career of managing her husband’s assets.

Before she died, she would own a number of financial interests and serve as director of various companies and corporations. She built homes for sale in Topeka and Long Beach.

A 1903 advertisement featured the “Tichenor Tract,” where 50-foot lots “in full view of the ocean” between present day Third Street and the Pacific Electric Railway were selling between $300 and $400, roughly $9,000 in today’s dollars. She would also serve as a member of the Dock & Terminal Company and the Long Beach Chamber of Commerce and be active in about 40 organizations in Long Beach.

She also applied that decisiveness to building her home.

Adelaide, who had traveled to Asia two years previously, found herself enamored by the Japanese Imperial Gardens at the 1904 St. Louis World’s Fair Louisiana Purchase Exposition. Writing from St. Louis, she implored famed architect Charles Greene to trek to the World’s Fair to see the designs for himself.

Adelaide had commissioned the firm Greene and Greene to build her house on Ocean Avenue. Up until that point, Greene and his brother Henry had been established Pasadena architects who were better known for their American Arts and Crafts aesthetic. Japanese architecture was new to them.

The result was a sight to behold and widely featured in publications when it was completed. The property, at 852 E. Ocean Ave., which sat on a bluff overlooking the ocean, included an Asian-inspired roof, exposed beams, stained glass windows, built-in bookshelves, French doors that opened onto a patio, a Japanese bridge that stretched over a lily pond, a tea house and lush landscaping.

The green space allowed Adelaide to grow bananas at her home, which the Long Beach Press in 1908 declared the “first successful attempt” in the state. The furniture – from desk chairs and tables to wall sconces and lamps – was custom-made to match the house and Adelaide’s vision of a fine home for entertaining the most influential in Long Beach.

The mother of Long Beach clubs

Adelaide shared her wealth and her influence to make Long Beach a better place, prompting admirers to call her the “Mother of Long Beach Clubs.”

She was pivotal to the establishment of the Long Beach Day Nursery, founded by her friend Florence Bixby, offering land at 805 Alamitos Ave. and an Edwardian house on Locust Avenue in 1916 that ended up at the new location.

Her generosity allowed the nursery to serve 50 children.

Adelaide initially donated the land anonymously, but there was so much buzz about the donation that she revealed her role as the gifter to Day Nursery leaders.

She didn’t donate the land for publicity or praise, Adelaide told them.

“I merely looked upon the chance to give a suitable lot and building as an opportunity – a real privilege as it were – to do a little good for an institution which has been doing genuinely splendid work in our city,“ she said.

Adelaide also formed one of the biggest women’s social institutions of the day locally with the Ebell Club, which began in her home with 17 other charter members in 1896.

The club hosted travel and cultural events and supported civic matters, including the city street-sparkling fund. The Ebell Club partnered with the Woman’s City Club to decorate and fund Long Beach’s first float in the Rose Parade. Ebell’s first fundraiser was a lawn party to raise money for books for the new city library, one of Adelaide’s great passions.

Under Adelaide, the Ebell Club also was vocal on city matters. In 1921, for example, she and other club members stormed a city meeting to oppose eliminating the city’s Spanish street names.

It was bad enough when the city changed the street name of Independencia to Cherry Avenue, Adelaide bristled, and now city planners were coming for the rest of the street names.

“Every one of those Spanish names is beautiful,” she argued. “Yes, even Ximeno, and it is just as easy to spell as ‘anemone.’ Why should we take the village custom of naming our streets (after) daisies and roses?”

At a 1905 Ebell symposium, Adelaide opined on the club’s influence in Long Beach and recalled her conversation with a man who said the club had done more for the city than “any other element.”

“Why, when the club first started, the impression was that Long Beach was nothing but a tent city, and that there were no people there except those who lived in tents,” Adelaide said. “After awhile, it was learned that there was an Ebell Club in Long Beach and then they decided that there really must be a town there with homes and intelligent people in them.”

Adelaide advocated heavily for the creation of a Long Beach Public Library, reportedly persuading Andrew Carnegie to donate $30,000 toward the cause.

In detailing the history of the Long Beach Public Library, local historian and author Claudine Burnett wrote that Adelaide and other local women persuaded Carnegie to give more for the library than the initial donation of $12,500, based on a city of 2,000 people.

“The women of Long Beach proved to his satisfaction that the 1900 U.S. Census was out of date, that instead of being a village of 2,200 people Long Beach’s population was nearer 22,000,” Burnett wrote.

For years, Adelaide collected the money for the library’s maintenance and purchased as many books in Los Angeles as she could and brought them home in her arms.

She later loaned various curios from her world travels to display in the library, including a “dissertation on the human body,” written in Arabic on strips of talipot palm she found while vacationing for weeks in Palestine.

She organized the original library board and was one of the five members responsible for procuring a building for the new city library.

Adelaide’s library involvement pushed her to become more involved in the suffragist movement.

Adelaide and two others were replaced by men on the city Library Board because the City Charter only allowed “qualified electors to hold office,” which at that time were men only, according to the book “Suffragists of Early Long Beach,” written by former Councilwoman Gerrie Schipske.

The dream of the Tichenor Clinic

But Adelaide’s greatest achievement was establishing a clinic-school for children with special needs, a facility inspired, in part, by her own disability.

Adelaide herself had a clubfoot that had affected her walking since birth and a clinic like the one she envisioned would have helped her.

Her clinic, for which she filed incorporation papers in 1920, would not only look after the physical and educational welfare of a child, but if that child were an orphan, the clinic would take the extra step of making sure the orphan was matched with a family and facilitating the adoption process.

Unfortunately, the clinic-school would be Adelaide’s final gift to the city she called her home for 30 years.

As preparatory work on the clinic continued, she died at the age of 78 in her home on May 10, 1924, after fighting an illness that kept her bedridden for seven months.

To secure its future, she bequeathed most of her money toward a sustaining trust of over $300,000, the equivalent of about $4.5 million today.

Adelaide never lived to see Tichenor Clinic open in the basement of Community Hospital in 1926 and later in a stand-alone Art Moderne building designed by famous Long Beach architect W. Horace Austin in 1938.

However, she saw what could be possible: a place where children with disabilities could reach their potential.

She would have been proud.

Dec. 27: How Tichenor Clinic met unmet needs of Long Beach, from polio and scoliosis to cerebral palsy and autism.

“Adelaide’s Legacy: Tichenor Orthopedic Clinic for Children” will be available for a donation to the clinic.